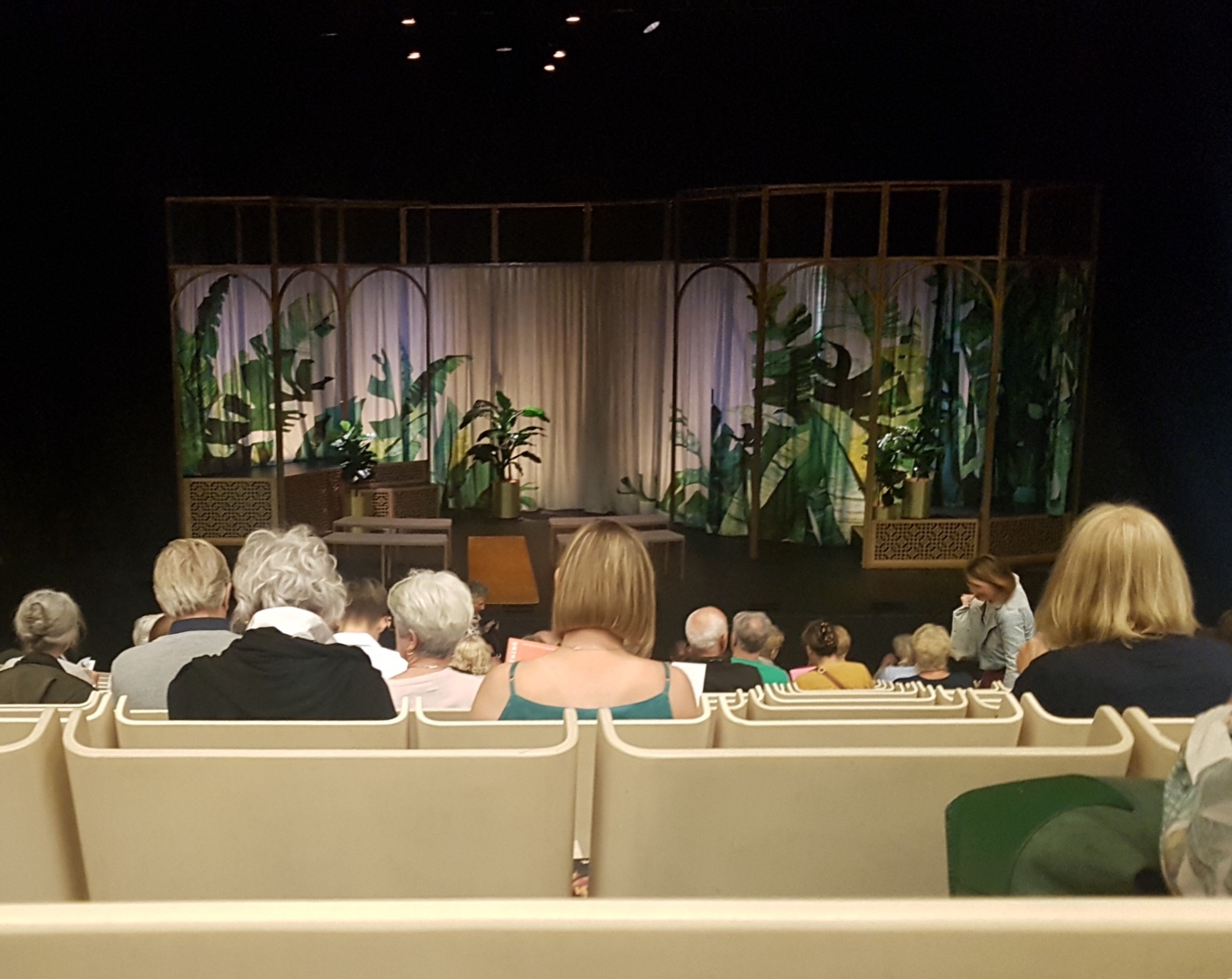 Trigger Warnings: death, dying, murder, threats of manslaughter, challenging people to duels, slander- you know, Shakespeare things (seriously though, this play mentions all that stuff; just thought I ought to let y’all know)

Bell Shakespeare is Australia’s answer to the Royal Shakespeare Company, with a distinct Aussie flavour. Their 2019 take on Much Ado About Nothing sees them transform Messina into a tropical paradise- complete with rainforest-watercolour backdrop, floral-inspired costumes, and wicker arches. It’s here that the players collide, and much occurs (contrary to the play’s name).

Much Ado About Nothing is Shakespeare’s classic tragic romantic comedy (and yes, the contradictions are necessary). Bell Shakespeare’s take on it this year was a daring exploration of the actions of men, and their impact on the women in the play; an incredibly relevant take in this day and age. But Much Ado lends itself so perfectly to such an expedition through its main plot line following the love story of Hero and Claudio.

Ah, yes, Hero and Claudio. How easy is it to forget about those two when you have the powerhouse couple that is Beatrice and Benedick? Luckily, director James Evans ensures that you don’t forget about them, as do the brilliant young actors (I say young, but they’re probably around my age lol) playing them, Will McDonald and Vivienne Awosoga, respectively. The thing you have to remember about this young couple is just that: they’re young. And we all know how Shakespeare likes to write his young lovers (looking at you, Romeo and Juliet). It starts off with a classic case of love-at-first-sight, with Claudio marvelling at Hero’s beauty.

CLAUDIO. In mine eye she is the sweetest lady that ever I looked on.

Fortunately for him, the feelings are mutual, and thus begins a strange courting in 2.1, where Don Pedro promises to gain Hero’s affections for Claudio on his behalf. We as a modern audience can see this going wrong a mile away, but naive young Claudio can’t see past his own- well. You choose. This is the perfect opportunity for Shakespeare to foreshadow the play’s main conflict, with Claudio being convinced by a masked Don John that Don Pedro is wooing Hero for himself.

Is it his fault for not stepping up and taking responsibility for his emotions? Perhaps. Is it Don John’s fault for messing with him? The other characters in the play would argue so. Is it Don Pedro’s fault for suggesting such a bizarre courting process? Maybe. But the most interesting thing about all this, is that we barely hear from Hero. We don’t hear about her feelings towards Claudio until after 2.1, and even in the scene itself, she doesn’t exchange dialogue with him. Even when it’s revealed that, yes, Don Pedro has wooed Hero for Claudio and they are to be married, she doesn’t actually have any lines.

BEATRICE. My cousin tells him in his ear that he is in her heart.

We hear Claudio waxing poetic about Hero, but never hear what Hero thinks of Claudio until they’re betrothed. The only time Awosoga’s Hero truly comes alive in her dialogue is when she’s trying to ‘trick’ Beatrice into falling in love with Benedick, and during her wedding scene. Unfortunately, the wedding is where it all goes wrong at once.

A brief note on a few events that preceded the wedding:

Understandably, Claudio and Don Pedro are not happy with this revelation. So, Claudio does the next logical thing in the face of this discovery: he waits until their wedding ceremony, and publicly accuses her – in front of her family and their friends – of being a wanton. Because nothing screams “wedding” like a public shaming. Claudio, Don Pedro, and Don John run their mouths, bulldozing poor Hero with their accusations. Awosoga’s Hero is aghast, offended, and damn near ticked off that she’s being subjected to such accusations, and tries to protest her innocence. Unfortunately, they dismiss her, and even her father is too dumbstruck to protect his daughter. In the end, their misplaced blame is too much for her to fight, and she faints. The boys take this as their cue to leave. How noble of them. Whatever it is, it was probably best- Okenyo’s Beatrice was ready to fight every single one of them for their slander, with Benedick just being able to hold her back. Unfortunately, it doesn’t stop for Hero there. She eventually comes to, but is then ripped apart by her own father. Sometimes when I think back over it, Leonato’s dialogue hurts more than Claudio’s. Maybe that’s because I’m a daughter, but really, hearing a father tell their daughter to ‘stay dead’ is gut-wrenchingly horrible.

LEONATO. Do not live, Hero, do not ope thine eyes, for, did I think thou wouldst not quickly die, thought I thy spirits were stronger than they shames, myself would, on the rearward of reproaches, strike at thy life. (4.1.121-126)

So, what do you do when you hit rock bottom in Shakespeare? You pretend you’re dead. I know, I know; Romeo and Juliet are quaking. But the aim behind this deception isn’t to escape feuding families. It’s to ‘guilt-trip’ Claudio (and Don Pedro) into feeling remorse for what they did to Hero (and get everyone to mourn her and forget her ‘transgressions’). Thankfully, the mastermind of the plan – the Friar – is there to keep Hero alive, but until then, the family (plus Benedick) are tasked with telling the world that Hero is dead. And trying to make Claudio pay for what he did.

Take a bow, Suzanne Pereira, because never has the word ‘boy’ taken on more of an insult than when it was wielded by her Antonio at Claudio himself.

In a wonderful twist, director Evans made Antonio, an uncle to Hero and Beatrice, an aunt. Blend in the character of the Friar, and Pereira’s Antonio is forged anew. And by Jove she did with that scene. There is pin-drop silence in the theatre as Pereira’s gentle, motherly character absolutely chews out Claudio for what he is- just a boy, in over his head, paying the consequences of his actions. It’s one of the defining moments of this production, and I think it’s one of the major events for Claudio’s arc. Because from that point on, it all goes downhill for the soldier boy.

Case in point: his reaction to Benedick challenging him to a duel later in 5.1. It’s the first time in the play that Benedick is so devoid of mirth, and it’s as jarring for the audience as it no doubt is for Claudio. Still, Claudio jokes around like nothing’s wrong, even trying to outwit Benedick at some point (needless to say, that doesn’t go down well). But I think McDonald’s Claudio is bluffing- turning up the bluster to drown out the twinge of regret he’s feeling about Hero.

It takes the confession from Borachio (also played by McDonald) for Claudio to truly understand what he’s done. It’s a beautifully framed scene, where McDonald plays both Claudio and Borachio, as Leonato demands to know who was the villain behind the deception. So overwhelmed with sadness is McDonald’s Claudio that when he is tasked with reading an epitaph for Hero at her funeral, he breaks down a few lines in, leaving Don Pedro to finish it. There’s no doubt when we get to the final scene that he’s feeling something that must be regret. But McDonald plays Claudio as a sulking boy; he feels remorse for what happened Hero, but he’s too stubborn to accept his part in it. And so, when he has to marry Antonio’s ‘other niece’ (a spitting image of his own lost daughter…), Claudio isn’t the most receptive groom-to-be by a long shot.

Now, for most of the play, it’s clear that only Claudio really gets a say in his relationship with Hero. In fact, the second wedding is meant to be the scene where he redeems himself, and where we (and Hero) forgive him. But what was impressive about Awosoga’s Hero, is how she seized that final scene- the second wedding where Hero miraculously lives again. It never really sat right with me that Hero just forgives Claudio at the end of the play for want of a happy ending, so I have no idea why it never occurred to me that it could be interpreted differently out of historical context (yeah, I know; duh, Lois). I’d call this a spoiler, but it ain’t exactly going to be played again, so I’ll give you this one.

In the scene, Hero removes her veil and reveals herself, alive and well. Claudio is shocked and amazed; he didn’t kill her with his words (yay). However, before he’s fully let off the hook, Awosoga’s Hero does something that people aren’t expecting: she slaps him. An audible gasp runs through the audience at this point, but honestly, all I could do was nod. Because finally, it all makes sense.

Major kudos to the director and Vivienne Awosoga here for taking the tough route. Not because it was particularly hard to orchestrate, but because it wasn’t the ending that people expect from a ‘romantic’ comedy, especially this one. For now, we get to see what’s going on in Hero’s head. Here, she reclaims her story, and Claudio realises that it’s going to take time (and quite a bit of effort) for him to get back into her good graces (and the rest of the family’s, I imagine). This moment in itself is absolutely iconic, and really hits the production’s message home strong. It also leaves the ending of Much Ado ripe for a potential sequel… oh, just me?

BEATRICE. Princes and counties! Surely, a princely testimony, a goodly count… But manhood is melted into curtsies, valor into compliment, and men are only turned into tongue, and trim ones too. … I cannot be a man with wishing, therefore I will die a woman with grieving. (4.1.309-316)

Throughout this production of the play, it becomes so obvious who does a lot of the talking- and who manages to screw everything up. By no mistake, they’re the same people; it’s the boys. But specifically (and perhaps, a little ironically considering how they were introduced to the audience), it’s the supposedly ‘noble’ men who are acting without thinking about the consequences. It’s the two princes, Don John and Don Pedro, who use surprisingly similar tactics of deception and manipulation to kick start the main plot lines:

And it’s the young ‘Count’ Claudio who acts the most impulsively when it comes to his courting of Hero. To have such men of supposed power making some incredibly rash decisions is a driver of the plot, but also a warning to a modern audience. Much Ado About Nothing balances the tricky task of serving up a healthy dose of laughs, and thought-provoking performances. As many before me have said, it is a masterclass in Shakespearean form and acting, and a breath of fresh air not just visually, but also in its interpretation. I only have one criticism about this production, and that is that it will never be shown again, and I wasn’t able to drag everyone I knew to it.

To the cast and crew of Bell Shakespeare’s 2019 production of Much Ado About Nothing, I thank you, and I salute you.

Song of the post: Coldplay’s Everyday Life album came out a day before I watched Much Ado, so naturally, I had Coldplay on the brain when I went to watch it. I would say Cry Cry Cry by Coldplay, but I’ll leave that for my Beatrice and Benedick post…

For naive young Claudio, I offer Champion of the World; an anthem for a boy adrift, trying to find a way to make amends with someone he loves… ?